His uncle, Nana Kwadwo (Koo) Korang, is seated immediately to his right.

(Photo taken after installation. According to Nana's Diary entry, the installation took place at Odomasi On Sunday, February 29, 1976). 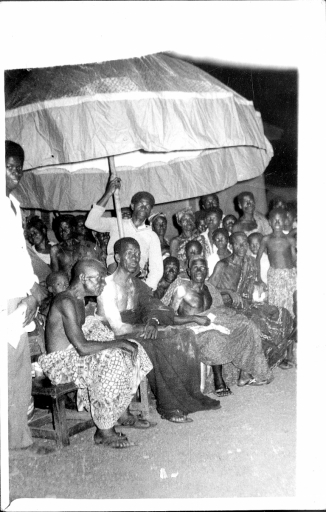 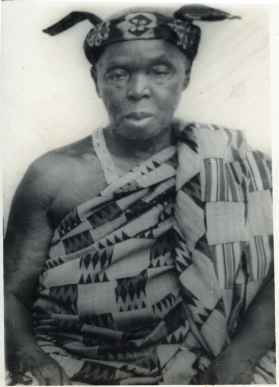 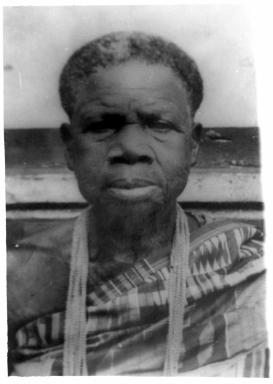 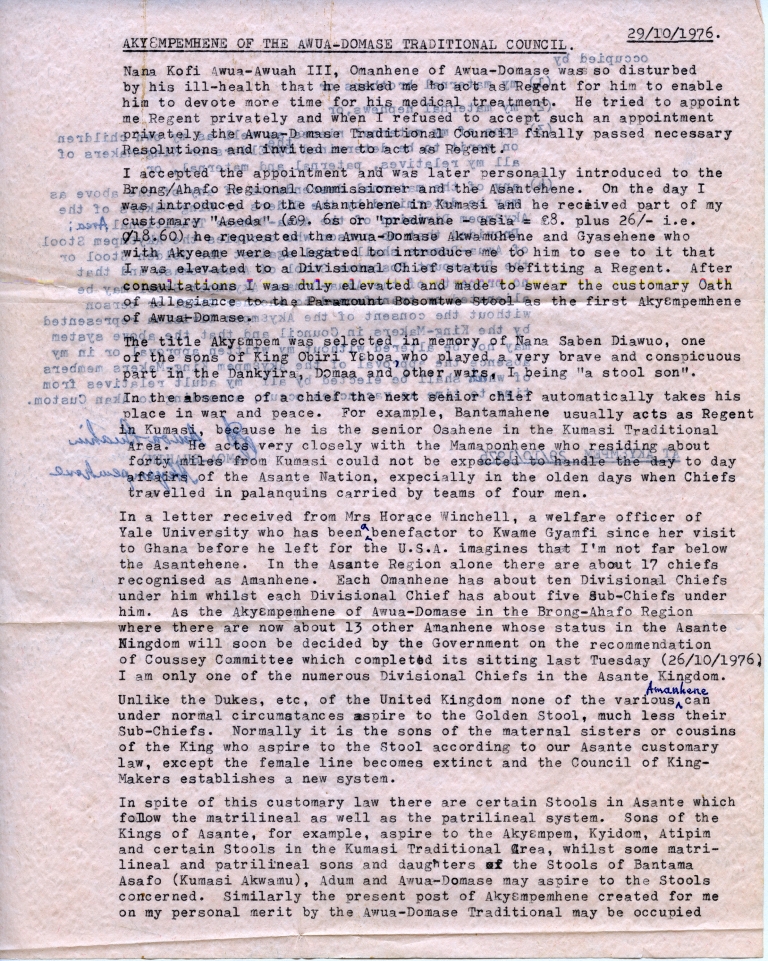 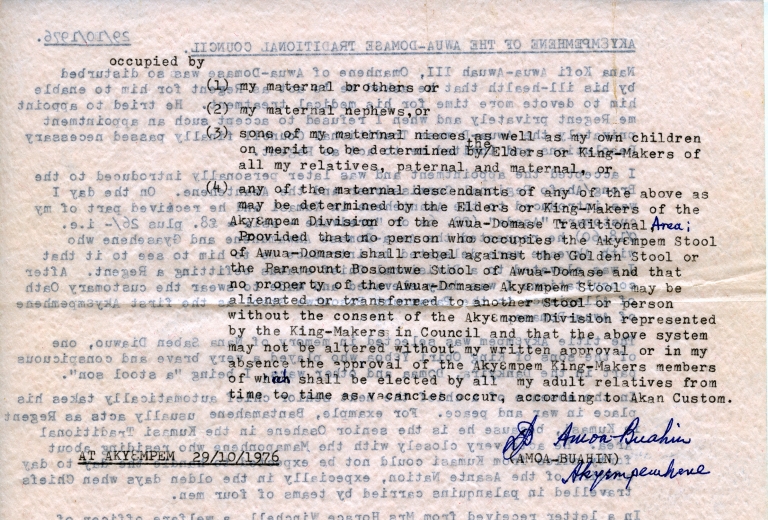 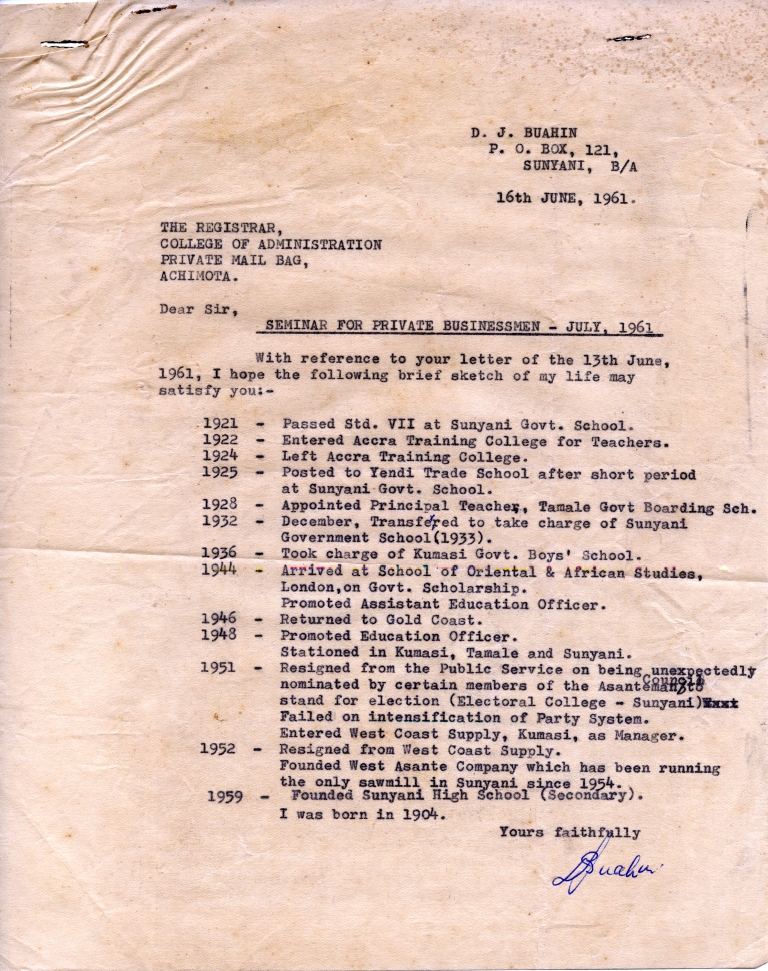 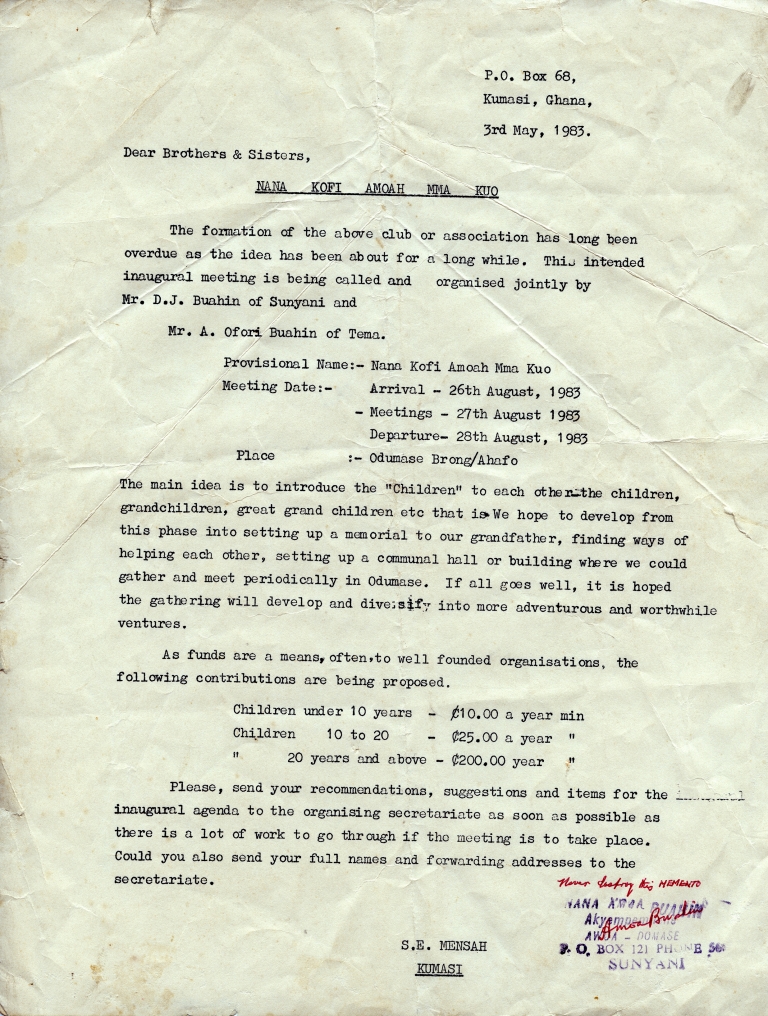 The most obvious points of local resistance to the CPP in 1951 were in fact the state councils of chiefs through the backing they were able to give to a particular candidate. Although the chiefs were slow to move in face of the "young men's party", and discouraged by the poor start to the Joint Territorial Council movement, they were not inactive. They set about things their own way, using their state council machinery of wing-chiefs and councillors, and prevailing on local figures of importance to stand. D.J. Buahin, an education officer in Sunyani (Ashanti), was persuaded by Nana Yiadom Boakye Owusu II (Berekumhene), the local paramount chief, to file his nomination papers as a member of the Asante Kotoko Society [60]. The Asanteman Council and the Kotoko Society sponsored K. A. T. Amankwah in Amansie. The Mampong State Council backed the Rev. S. C. Nimako against Atta Mensah [61]. This assertion of local and traditional interests could be seen most clearly, however, where the chief was himself a candidate. Three paramount chiefs stood for election on the 8th: Nana Sir Tsibu Darku of the small state of Asin Atandansu in the Colony, Nana Akompi Firim III of Kadjebi in the Akan-speaking area of South Togoland, and Nana Agyeman Badu of the Dormaa state in Western Ashanti. In Wenchi, in north-west Ashanti, the paramount chief Nana Kusi Appeah placed the full weight of his authority behind his elder brother, Dr. K. A. Busia.....

The charge usually levied at the territorial members was that they had entered the Assembly "through the backdoor", and Krobo Edusei mocked Busia's election on these grounds, for Busia had lost not only in Wenchi but on the first count in the Asanteman Council election. He was placed seventh (level with D. J. Buahin): then Dr. I. B. Asafu Adjaye announced that, although elected, he did not wish to take his seat, and Busia was given his place. 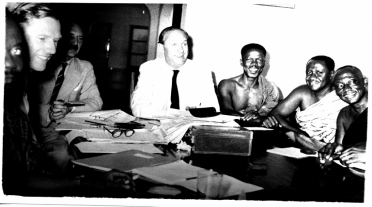 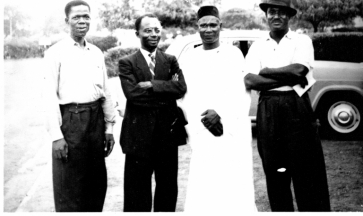 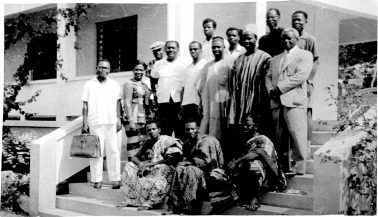 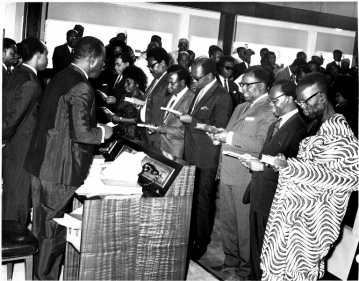 Photograph taken about 50 years ago features some citizens of Odomase. The youngest boys (twins) in the photograph are now (March 31, 2008) 61 years old. Note the Ghanaian flag decorations. Also of note, 2 Policemen in mufti are standing on the veranda next to the VW automobile 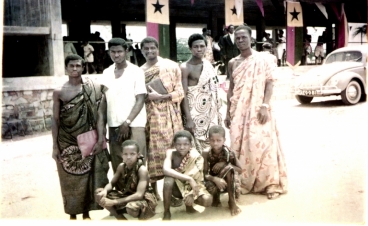 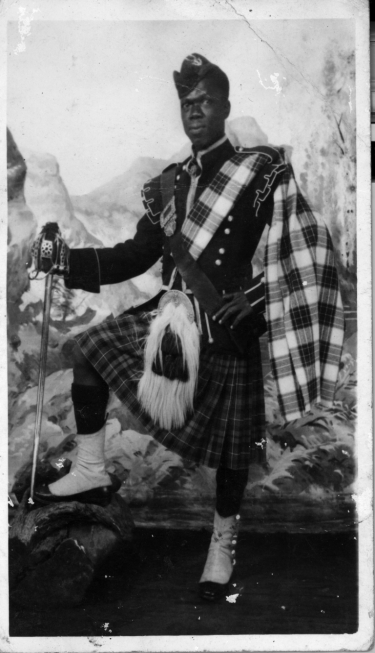 From: Dennis Austin and Robin Luckham, Editors: Politicians and Soldiers in Ghana . pp64-65

The making of a constitution for the return to civilian rule was a good indicator of the N.L.C's self conscious desire to take the army out of politics. The establishment of a Constitutional Commission was announced on 1 September 1966, barely seven months after the coup. The Commision began its hearings on 1 December 1966, and held its last meeting on 15 December 1967. The Draft Constitution and the elaborate Memorandum which sought to explain and justify it were published in January 1968. But it was not until December 1968 that the Draft was entrusted to a larger and more representative Constituent Assembly for debate, and not until August 1969 that the Assembly finally ratified the Constitution, a matter of days before the election which brought Dr. Busia's party to office. By that time, it had become clear that the N.L.C had no intention of transferring power until it could be sure of an acceptable successor regime, or at the very least of a set of constitutional rules which would provide a framework within which such a regime could establish itself. Yet one of the most remarkable features of the dliberations of both the Commission and the Assembly was the way in which the N.L.C.- except on one occasion only[3]- kept out of the proceedings and left the civilians to get on with the job of providing a Constitution.

The probability that the military would accept the Constitution lay of course in the N.L.C.'s choice of the people who were to draft it. The Constitutional Commission was made up of respectable public figures. Eleven of its seventeen members were members of the Political Committee which the N.L.C. had established in June 1966 [4]. Most had been leading figures in the nationalist movement in the late 1940s and early 1950s. The majority had either opposed the C.P.P. from the start or became disillusioned with it later on. The Chairman, the Hon. Mr Justice Edward Akuffo-Addo, like his brother-in-law W.E.A. Ofori-Atta, and R.S. Blay who became the Speaker of the Constituent Assembly, had been a founding member of the United Gold Coast Convention in 1947. He had also been a member of the Coussey Committee on constitutional reform in 1948-49, together with Nene Azu Mate Kole, J.A. Braimah and K.A. Bossman, three other members of the Commission. B.A. Bentum was the only Commissioner whose aversion to the C.P.P. dated from 24 February 1966 when, instead of being held in Protective Custody, he was appointed General Secretary of the Trades Union Congress [5].

A number of the Commissioners were also among the beneficiaries of the return to civilian rule. The Chairman was elected President of Ghana in 1970 after the Progress government had put out an unofficial whip in his behalf through Saki Scheck, who had by then become Chief Whip for the Progress Party in the National Assembly; W.E.A. Ofori-Atta and Victor Owusu became Ministers, Adam Amandi and Kweku Baah (a joint Secretary to the Commission) were appointed Ministerial Secretaries. J.A. Braimah became Regional Chief Executive of the Northern Region. Nene Azu Mate Kole and D.J. Buahin were made members (in December 1970) of the Council of State. Abayifa Karbo remained Chairman of the Public Services Commission, to which he had been appointed by the N.L.C.; B.D.G. Folson was made acting Chairman of the Centre for Civic Education, and Mr Justice V.C.R.A.C. Crabbe became a Supremem Court Judge following a period of office as Interim Electoral Commissioner when he supervised the elections which brought the return to civilian rule. 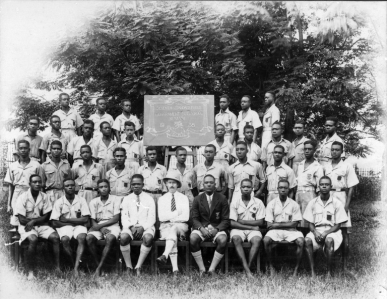 1938: Victorious Athletics Sports and Football teams from the Kumasi Government Boys' School (Asem), which won the Danby Shield (Athletics) and the Challenge Shield of the Kumasi Schools Football League, Photographed at Empire Day Sports event.
"One of the strongest teams of Kumasi Government Boys's School", according to Nana's notes . He is standing in the middle of the back row in a dark blazer. 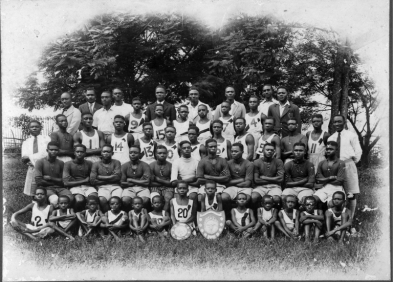 Nana is seated at the extreme left. Others identified, seated from right to left are Mr Osafo, Mr Bernasko and Mr V.A. Tettey, Deputy Director of Education 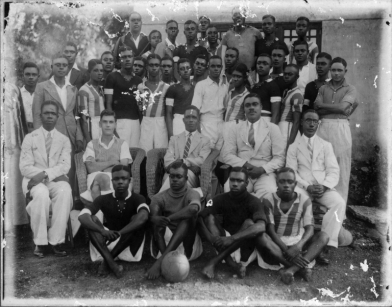 Nana is sitting, 3rd from left. 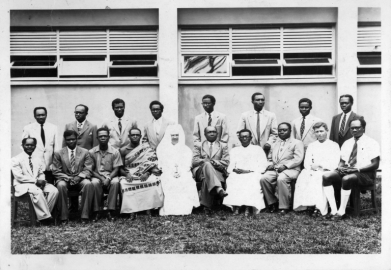 Nana is 6th from left, back row. 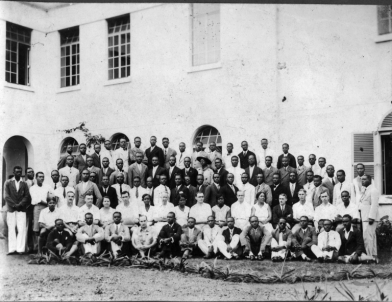 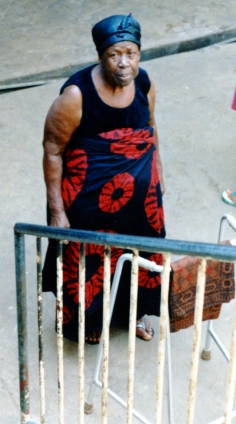 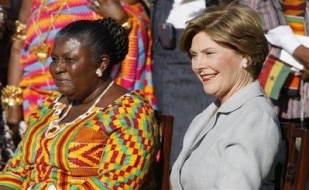 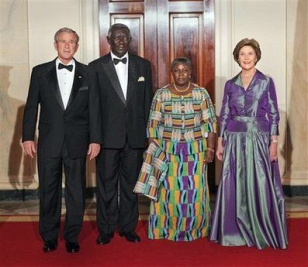 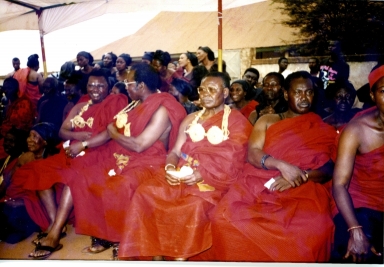 The two grew up together in the same househeld and attended the same Primary School (as classmates). 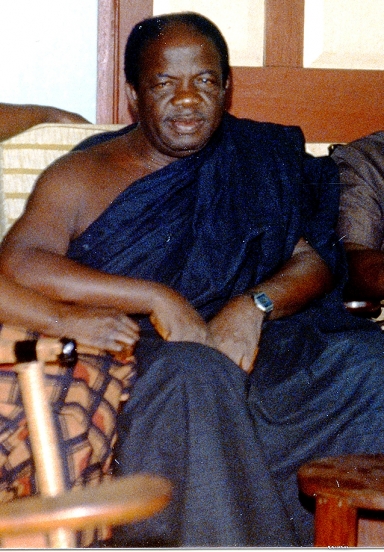 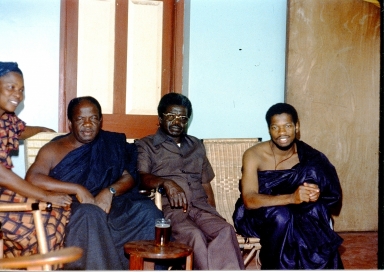