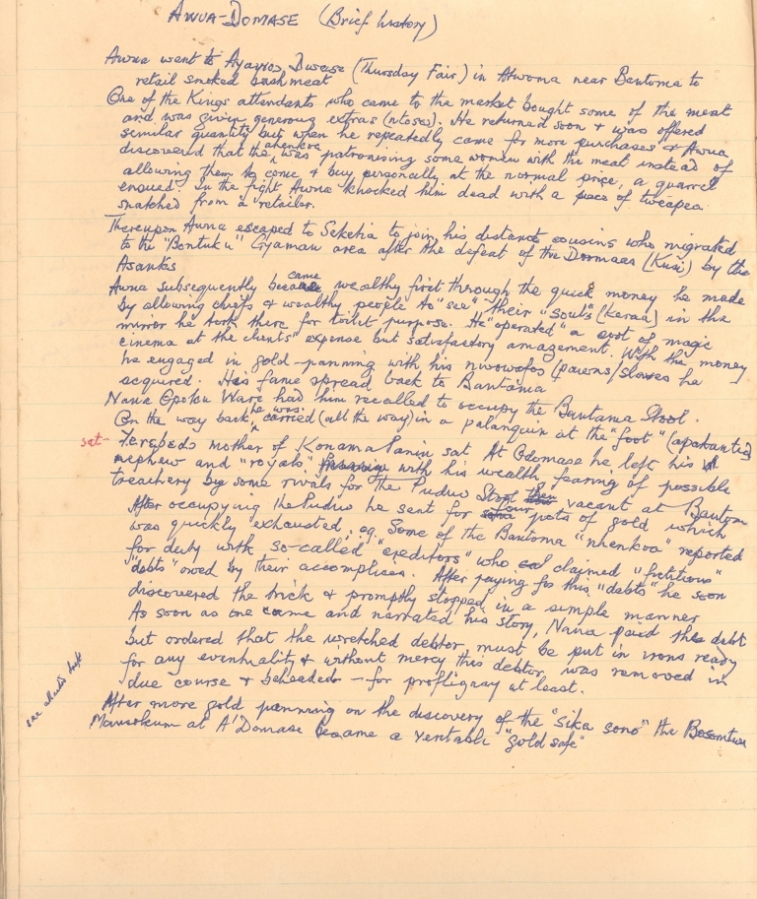 Awua went to Ayawoɔ Dwaso (Thursday Fair) in Atwoma near Bantama to retail smoked bush meat. One of the King’s Attendants who came to the market bought some of the meat and was given generous extras (ntosoɔ). He returned soon and was offered similar quantity but when he repeatedly came for more purchases and Awua discovered that the Ahenkora was patronizing some women with the meat instead of allowing them to come and buy personally at the normal price, a quarrel ensued. In the fight, Awua knocked him dead with a piece of tweapea snatched from a retailer.

Awua subsequently became wealthy, first through the quick money he made by allowing chiefs and wealthy people to “see” their “souls” (keraa) in the mirror he took there for toilet purposes. He “operated” a sort of magic cinema at the chiefs’ expense but satisfactory amazement. With the magic, he engaged in gold panning with his nwowafoɔ (pawns and slaves he acquired). His fame spread back to Bantama.

Nana Opoku Ware had him recalled to occupy the Bantama stool. On the way back, he was carried (all the way) in a palanquin. At the foot (apakantia) sat Yerɛbɛdɔ, mother of Konama Panin. At Odomase, he left his nephew and “royals’ with his wealth, fearing of possible treachery by some rivals for the Puduo Stool then vacant at Bantama.

After occupying the Puduo, he sent for four pots of gold, which was quickly exhausted. For example, some of the Bantoma “nhenkora” reported for duty with so-called “creditors” who claimed “fictitious” “debts” owed by their accomplices. After paying for these “debts” he soon discovered the trick and promptly stopped it in a simple manner. As soon as one came and narrated this story, Nana paid the debt but ordered that the wretched debtor must be put in irons ready for any eventuality and, without mercy, this debtor was removed in due course and beheaded--- for profligacy at least.

After more gold panning on the discovery of the “sika sono”, the Bosomtwe Mausoleum at Awua Domase became a veritable “gold safe”.