n order to understand the rise to power of the Ayoko line, it is necessary to return to the time when Okumanyinase, which later developed into Kumasi, was founded, a city destined to become the capital of the Asante Kingdom. Okumanyinase is said to owe its origin to the enterprise of a Dagomba hunter from Yendi, who, in order to sell his elephant meat, opened a stall, if one may call it that, under an Okumanyinase tree on the north-south trade road, some 30 miles north of Fomase-Akyerekyere. Other hunters and farmers from the northern countries gathered round him to supply food and shelter to those who passed on the road- traders with their porters and slaves
[Information given by the Omanhene of Asin-Apemanim Nana Nkyi Ababio; also by the Gyamanhene at Bonduku] Ref:

About 1600 the first large Akan group settled near Okumanyinase. They were Aduana from Nyankyimaduakotene (south of Akrokere) in Akyerekyere, who under their elder, Otumfo Bi, a smith, founded the village of Asafo, regarded today as the oldest quarter of Kumasi. He was accustomed to the Akan form of government and urged that the people from the north introduce the abusua or matrilineal clan system, so that his own people could intermarry with them and they could all become one people with one language [Information given by the Aduana chief in Kumasi]. It is not known how far he succeeded but a close relation of his, Kwabia Amenfi, who succeeded him, is reported to have been chief of the settlements or villages of both people and of a part of the region in which they are situated- i.e., Kwaman, "thick forest". He in turn was succeeded by Oti Akenten, an Ayoko by adoption, who is said to have bought the chieftainship when he came from Asantemanso to Okumanyinase [Information given by the Asantehene Nana Sir Osei Agyeman Prempeh II]. Some believe that it was he who first called the town Kumasi [Information given by the Asantehene. More prevalent is the legend that Okomfo Anokye renamed the town] 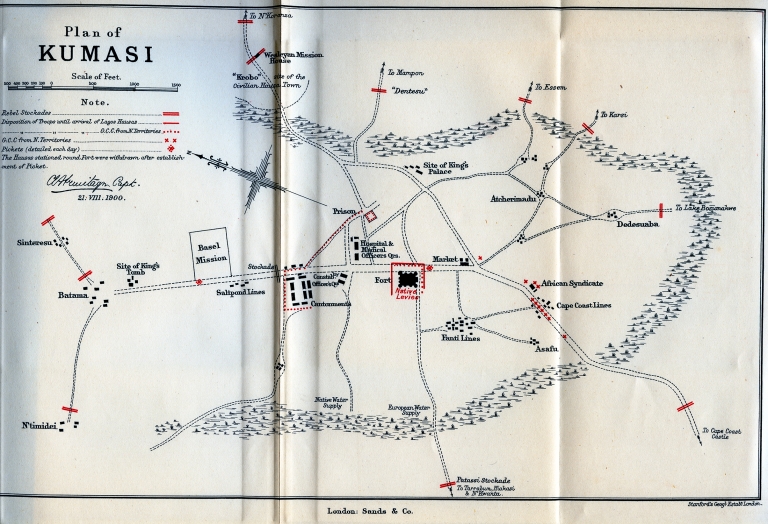 The Kumasi of 1900 was but a shadow of the former town entered by Sir Francis Scott in 1895. Although never completely rebuilt after its destruction in 1874, there was still something imposing about it. Among the many ordinary native huts rose steep-roofed, beautifully-built swish houses, decorated with most graceful designs. The king's palace, built between the road leading from the Cape Coast road to N'Koranza and the swamp, towered above all the other houses. On entering it by the great gateway one wandered from one courtyard, surrounded by two-storied buildings, the roofs supported by great swish pillars, the interiors sometimes partly hidden by open-work designs in swish and wattle, to another; from one curious little enclosure, to fetish trees surrounded by the debris of sacrifices; from the king's prisons-- ghastly holes in which a man could not stand upright-- to the ruins of the stone palace destroyed in '74. Of this immense building nothing remained except a few huts which once housed the king's attendants. The chiefs' houses of '95 had also been destroyed to make way for the European buildings, the Haussa cantonments, and the parade ground. When we marched out of Kumasi, the only native houses which remained standing were a few in the Fanti and Cape Coast lines. The remainder had been pulled down for firewood and to build the shelters which surrounded the Fort. 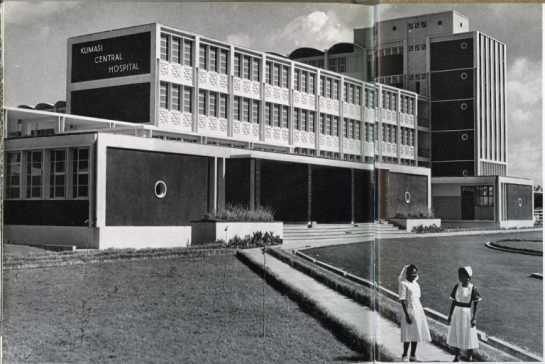 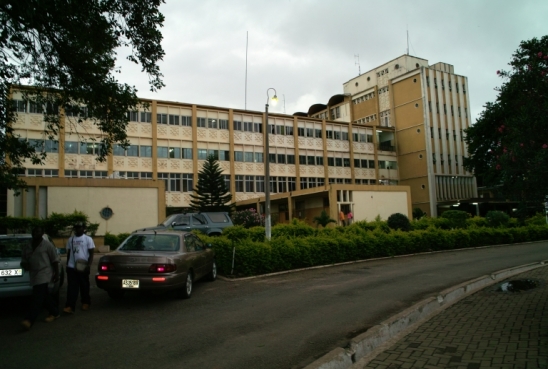 Clearly, an excellent maintenance regimen has been maintained over the years. 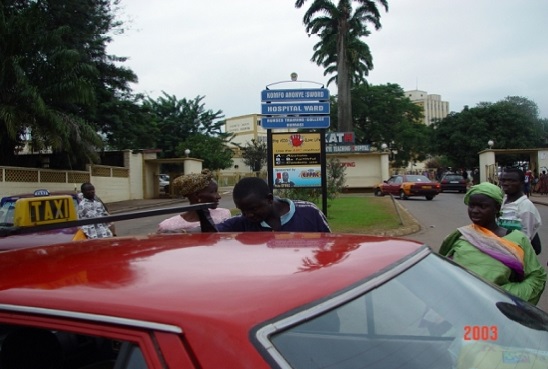 Entrance. The photographer took the picture while standing next to the Okomfo Anokye statue. 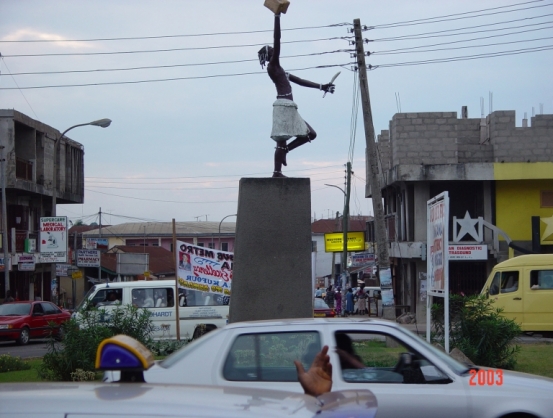 He is depicted conjuring up (and down) from the skies the famous Golden Stool (Sikadwa Kofi), the soul of the Asante Nation, at the time of formation of the original Asante (Esa-nti, roughly, "because of war") Confederacy of Akan nation-states in 1701. Asante was originally a war coalition of the willing that was organized to fight off the yoke of Denkyira domination and hegemony over its neighbors. The coalition soundly defeated Denkyirahene Ntim Gyakari during the famous battle at Feyiase. Thereafter, Asanteman was born.

The statue is situated at the entrance to the Okomfo Anokye Teaching Hospital in Kumasi, Ghana. 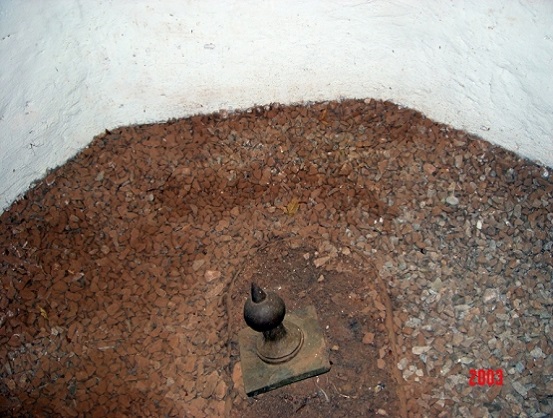 Planted at a spot now within the confines of the aptly-named Okomfo Anokye Teaching Hospital in Kumasi. Legend has it that many have tried but, so far, no one has been able to dislodge it from its original position.

... Europeans were favourably impressed by Asante villages and towns; many noted how villages became neater and more prosperous in Asante. 'At Attobiasi one sees the first Ashanti hut and marks the improvement of the architecture. The walls are solidly built of wattle, no brick, the flooring is raised two feet, carefully smoothed and painted red. The outer wall, also painted up to a certain height, is stuccoed in deep panels, circles and other devices' [Frederick Boyle, Through Fanteeland to Coomassie, London, 1874, p. 87]], wrote one of the British invaders in 1874.

Visitors also remarked upon the cleanliness of Asante settlements. Dupuis noted that in 1820 the streets of Kumase had been cleaned at the royal command and how the markets and main streets of many, perhaps most, towns were kept clean of dirt and litter (although the side-streets and back alleys were less attractive in some places) [Joseph Dupuis, Journal of a Residence in Ashantee, London, 1824, pp. 48, 66]. The British Governor Winniet, who visted Kumase in 1848, praised the width and cleanliness of the Kumase streets. Even the hostile reporters and soldiers with the 1874 British invasion forces admitted this, although some claimed the stench of "human sacrifice" filled the city. "Clean", "attractive", "neat" are epithets which occur again and again in reference to Asante settlements.